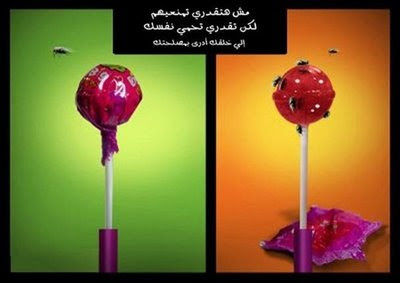 The 'veil your lollipop' campaign hit Cairo in 2008, stating: 'You can't stop them, but you can protect yourself' - part of a wider public discourse that has attempted to shift the blame for sexual harassment onto female victims themselves

Suzanne Mubarak, First Lady of Egypt, is a woman who treats criticisms of her country with a generous dose of scepticism. Take sexual harassment, a phenomenon that has indisputably been on the rise in recent years. It's an issue in which Mrs Mubarak, as head of the government's National Council for Women, might be assumed to take at least a passing interest.

"Egyptian men always respect Egyptian women," she gallantly informed a pan-Arab television station back in 2008, a few weeks after a series of sexual assaults marred a major public holiday. "Maybe one, two or even 10 incidents occurred. Egypt is home to 80m people. We can't talk of a phenomenon. Maybe a few scatterbrained youths are behind this crime."

Those "few scatterbrained youths" must have been extremely busy. In the same year that the First Lady took to the airwaves to accuse media outlets of "exaggerating" reports of sexual harassment, a Cairo-based NGO released the first major survey of women's experiences in this area; it concluded that 83% of Egyptian females and 98% of foreign females had been exposed to some form of sexual harassment in Egypt – almost half of them on a daily basis.

The report, which was issued by the Egyptian Centre for Women's Rights (ECWR), also revealed that two-thirds of men admitted to carrying out harassment – defined by the survey as "unwanted sexual conduct deliberately perpetrated by the harasser, resulting in the sexual, physical and psychological abuse of the victim regardless of location". Examples cited by respondents included groping, verbal harassment, stalking and indecent exposure.

As several bloggers observed at the time, Suzanne Mubarak – wife of an authoritarian leader whose corrupt regime has turned detachment from reality into an art form – is hardly the go-to woman for an insight into what's happening on the ground. The blogger Zeinobia, a keen analyst of Egyptian affairs, memorably pointed out that Mrs M had never walked alone on a street that hadn't been cleaned of everything – including humans.

It's the attitude of those like Suzanne Mubarak, who refuse to believe the evidence and automatically dismiss any discussion as a nefarious plot to tarnish Egypt's reputation, that has ensured no specific legal prohibition on sexual harassment exists on the statute book (though three draft laws in this area are currently making their way through the country's glacially slow parliamentary process).

Now though, a group of volunteer activists is launching a project that aims to prove sexual harassment sceptics wrong – and help transform social attitudes towards women in the process.

HarassMap, which will launch later this year if it can find a funding partner in time, is a web-based system which allows women to instantly report incidents of sexual harassment via SMS. Victims will receive an immediate text response, offering them support and practical advice and a centralised list of organisations that can help – something that isn't available at the moment. More importantly, the reports will be used to build up a publicly available map detailing harassment hotspots, partly so that women can take extra care in those areas and partly to shame the authorities into tackling the problem head-on.

It's based on an open-source mapping tool called Ushahidi which is more commonly associated with humanitarian disasters and election monitoring.

"HarassMap will offer victims a practical way of responding, something to fight back with," explains co-creator Rebecca Chiao. "As someone who has experienced sexual harassment personally on the streets of Cairo, I know that the most frustrating part of it was feeling like there was nothing I could do."

The team behind HarassMap – a mix of Egyptians and foreigners, most of whom have a background in women's rights campaigning – have an ambitious set of ideas to go with the basic map. In places where harassment is revealed to be rampant, they want to encourage shopkeepers to offer their premises as "safe spaces" where women can come if they feel threatened. In the long term the team would even like to connect their system to the police network to allow the forces of law and order to react quickly and catch offenders (although in the ECWR survey, foreign women identified policemen themselves as the most likely perpetrators of sexual harassment).

It's not a catch-all solution – for one thing sexual harassment here is not so much localised as it is psychologically internalised, existing in mobile places like buses and tube trains as well as away from the streets, in the workplace and behind domestic walls. But it's a start.

In order to get the project off the ground they'll have to tread a fine line between raising awareness and stirring up debate while simultaneously dodging accusations of being unpatriotic and ruining Egypt's reputation.

One of the most interesting aspects of the project, though, is the question it raises: why is sexual harassment such a problem in Egypt? Anecdotal evidence suggests that 20 years ago this simply wasn't an issue on the same scale; when cases of harassment did occur other people on the street would often step in to help. These days such assistance is rarely forthcoming.

Many different explanations have been put forward, with varying degrees of credibility. Some blame Islam's (highly contested) attitude to women, though harassment levels in Egypt seem to far outstrip those in other Muslim countries. Others point to sexual frustration, which is certainly a factor in a country where economic pressures are forcing many young people to wait longer and longer before they can afford to marry – but this doesn't account for pre-pubescent children and married men being among the harassment repeat offenders.

HarassMap's Rebecca Chiao offers another perspective: "Egyptians today are exposed to a great many pressures: unemployment, inflation, urban overcrowding, pollution … pressure from all directions. And one of the ways that pressure manifests itself is in the targeting of the weak and marginalised; in the news we see negative attitudes towards refugees, sectarian violence, and of course harassment of women – who are a social minority, despite making up 50% of society."

It’s certainly true that this is an age when clashing cultural perceptions of women are taking centre stage; in a media market dominated by Saudi-style Salafist Islam on the one hand and western MTV culture on the other – both of which objectify females as sex objects and deny agency to both men and women over the way ideas about gender are constructed – women can all too easily find themselves being cast as 'fair game' targets for street harassment in what remains an overwhelmingly patriarchal society. Whether the HarassMap can make a difference remains to be seen.
Posted by Jack Shenker at Tuesday, September 21, 2010