A Vote of Self-Confidence

-Belgrade - February 2008
-Taken from the Guardian's 'Comment is Free' 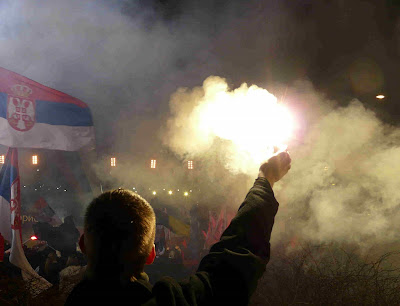 Belgrade has straddled the border between east and west since the fourth century, when the Roman empire was torn apart by a schism that would last over a thousand years. This week, the city's fume-choked streets bore witness to another clash between Asia and Europe, as two opposing visions of Serbia's future were placed before a volatile electorate. The outcome, a razor-sharp "victory" for the latter, will have decisive ramifications, both local and global.

This, at least, was the angle taken by much of the western media as Serbia went to the polls to elect its next president. Incumbent Boris Tadic, a pro-western moderate feted as a progressive democrat by the west, faced down a strong challenge from hardline Serb nationalist Tomislav Nikolic, who was standing in for his party's official leader,Vojislav Seselj (currently on trial for alleged war crimes in The Hague). The vote could not have come at a more sensitive time; overshadowing the two contenders throughout the campign was the question of Kosovo's independence, due to be announced unilaterally by the territory's ethnic Albanian leadership within the next few weeks. Tadic preaches moderation and negotiation on this sensitive topic; Nikolic promised not to "sit back" and let it happen, and threatened military intervention. No less important was the question of European integration, another bone of contention that led the EU and the US to virtually bankroll the winner's campaign.

On the ground in the nation's capital, where every inch of barren concrete is plastered with the candidates' smiling faces, it is hard to argue with the notion that it was a fundamentally divided Serbian society that exercised its democratic rights on Sunday. But speaking to those who made the crucial decision - evening shoppers on Republic Square, students eating their lunch outside the university campus, or party activists cheering at the final rallies - it became clear that the picture is far more confused.

Take Alexandra Bozic. A 19-year-old English-speaking student who dreams of hassle-free trips to Paris and London, she is the archetypal Democratic party supporter, rejecting the narrow nationalism of the past and embracing a peaceful, neoliberal western future. I found her a few days before the poll at the fringes of one of Tadic's all-singing, all-dancing mega-rallies at the heart of the city centre. But Alexandra hadn't planned to be at here; she stumbled across the commotion while shopping for shoes and was slightly nonplussed by the thunderous speakers and garish floodlights. "I don't support anyone," she told me stubbornly, wrinkling her nose at the east v west paradigm that has been tirelessly imposed on this country. Like many of her peers, she was enticed by the opportunities for easy travel and other perks Serbia's accession to the EU could provide her with. Those nearby echoed her apathy; Tadic is seen by many young people as tired and corrupt, but he represents their passport to modernity. Alexandra and her friends are part of a reluctant band of democrats that handed Tadic victory, not out of any deep-seated alignment with west over east, but rather out of self-centred necessity.

The same contradictions plague Nikolic's supporters, who gathered across town at the Belgrade Arena in the runup to the poll. The Serbian Radical party faithful live up to their western stereotype: folksongs celebrating Serbian Kosovo, thunderous chants of "Serbia, Serbia," shaved heads aplenty, and free-flowing beer were all hallmarks of its rallies. It's no surprise that many analysts found it easy to dismiss Nikolic's appeal as a backwards-looking throwback to "greater Serbia". Yet for many Serbians, Nikolic was first and foremost the non-Tadic: a promise of change and a break with a president perceived as crooked and haughtily disinterested in the economic troubles of the "common man". "Who doesn't," in the words of one anti-Tadic demonstrator, "care about the Serbian woman, who is reduced to begging?" Some of those that handed their vote to the Nikolic, like 54-year-old, small-time entrepreneur Boris Ristic, actively went out of their way to express admiration for Europe and vent their distaste of Milosevic. In the past few weeks Nikolic sought to tone down his extremist rhetoric; much of his support stemmed from popular concerns, while the drama of Kosovo and EU integratıon - though important - were bubbling at a far lower temperature than Europe's political elite seemed to believe.

A far cry from the stereotypes proffered by many observers of this election, the real choice was made by a largely apathetic majority, troubled not with a fundamental struggle between east and west, but rather with the day-to-day minutiae of jobs and travel. That is not to say that political passions aren't still running high in the Balkans - turnout on Sunday was high by local standards - but it is a mistake to see the people of Serbia as being divided into two irreconcilable camps. The two million voters who backed Nikolic do not represent a rejection of the west; nor was a vote for Tadic an unreserved endorsement of "modern" European values. While the rest of the world looked on, many Serbians saw this as primarily a vote about domestic politics; mundane as it may be, this should be born in mind by those in Brussels and Washington toasting the results.

Posted by Jack Shenker at Thursday, February 07, 2008 No comments: Links to this post