The Grand Imam of Cairo caused uproar by embracing Israel's president. But there's more behind the fuss than antisemitism.

-Taken from the Guardian's 'Comment is Free'
-Cairo - December 2008 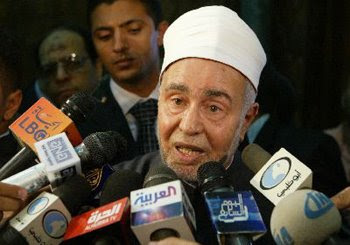 "I said shake, rattle and roll," sang rock legend Bill Haley in 1954, "well, you never do nothin' to save your doggone soul." Muhammad Sayyid Tantawi was a young theology student in 1950s Cairo and so probably wasn't well-versed in Haley's back catalogue; still, had he paid closer attention to the song's lyrics he might have found them alarmingly prophetic. Last month Sheikh Tantawi, now Egypt's top cleric and arguably the highest authority in Sunni Islam, shook the wrong hand, rattled the Muslim world, and is now facing increasingly-belligerent calls for his head to roll.

The ill-fated clasp took place at an interfaith conference in New York and the recipient was Israeli president Shimon Peres. Sheikh Tantawi, who as the Grand Imam of Cairo's al-Azhar mosque and university occupies the highest seat of learning in the Sunni world, claims the embrace was purely accidental. "I shook his hand like I did the others: at random, without even knowing him," Tantawi told the incredulous Egyptian press. Israeli reporters tell a different story, suggesting that it was Tantawi who approached Peres and that the two men had a warm and serious conversation throughout dinner.

Regardless of who is right, the handshake stirred up a storm of controversy that has dominated front pages for days in Egypt and beyond. The problem is that, intended or not, a friendly gesture between the Supreme Islamic Guide for the Muslim world on the one side and the president of a Zionist state on the other is seen by many in the Middle East as a painful propaganda gift to the Israelis, just as hundreds and thousands of Gazan Muslims remain trapped under brutal siege by the Israeli army. The pan-Arab newspaper al-Quds al-Arabi called Tantawi "absurd"; the Egyptian opposition daily, al-Dostour, is now running a high-profile campaign for his dismissal.

Despite taking on the appearance of a catty squabble, this affair is deeply serious. Egypt's fragile peace with Israel since the two countries agreed to recognise each other in 1979 has always been more fragile than peaceful, and the Egyptian government's overtures to its Israeli neighbours have never been popular in the "Arab street". Regionally, the Iran-Syria-Hamas-Hizbullah bloc has consistently criticised Egypt for "selling out" their Palestinian brothers during the current round of negotiations; domestically the Egyptian regime has been subject to angry protests over its effort to supply subsidised gas to Israel and its perceived acquiescence to Gaza's transformation into the world's largest prison cell. Cairo politics is therefore hyper-sensitive to allegations of Zionist sympathies, and most public figures go out of their way to avoid being labelled traitors to the Palestinian cause.

Some regard the furore as a fresh example of latent antisemitism pervading Arab society, even among the educated elite. The Wall Street Journal recently documented a series of articles in the liberal Egyptian press which apparently laid blame for the world economic crisis at the feet of "speculating Jews".

Tantawi himself has dismissed his critics as "lunatics", arguing: "And if I had known who it was, would the handshake amount to heresy? ... Isn't he from a country that we recognise?" The sheikh went on to fan the flames by insisting that if any Israeli officials wanted to visit al-Azhar, the bastion of Sunni Islam, he would welcome them.

But explaining the media hysteria over Tantawi through the lens of antisemitism or lunacy misses the point entirely. Since taking office at al-Azhar 12 years ago the sheikh himself has never scored high in the popularity stakes. Many of his previous positions have proved divisive at home, such as his sanctioning of the French ban on schoolgirls wearing the hijab and his condemnation of Palestinian suicide bombers, and he recently pursued a vindictive case against two well-respected newspaper editors.

More significantly, Tantawi has a reputation for being aloof and unapproachable, a personal symbol of the alienation many Egyptian Muslims feel from al-Azhar itself. One young Egyptian reporter described his disappointment at travelling to the ancient university to interview Tantawi and discovering a distinct lack of religiosity within it: "For many Muslims of my generation," he wrote, "this would seem to corroborate an increasingly current notion that al-Azhar no longer caters to the broad base of (disinherited, or else discontented) Muslim people, but rather to the educational, official and institutional sides of Islam."

The detachment many Muslims feel from the formal centre of Sunni Islam stems at least partly from its transformation into a government mouthpiece. Like many of his predecessors, Tantawi was appointed by Egypt's wildly unpopular President Mubarak, and — in contrast to the Coptic Christian Pope Shenouda, spiritual leader of Egypt's other major religious community — the sheikh has placidly toed the government line. Al-Quds al-Arabi has labelled him a mouthpiece of Egypt's authoritarian regime and the popular cynicism this has engendered among the general public has led many Muslims to seek new sources of religious guidance away from Al-Azhar.

Today the institution most Egyptians turn to for Islamic counsel is satellite television, and the man giving it is more likely to be a blockbuster preacher like Amr Khaled than an old cleric like Tantawi. Khaled draws millions of viewers to his pan-Arab shows and has been named by Time magazine as one of the world's 100 most influential people — part of a new generation of preachers who are sidestepping the religious infrastructures built up by their conservative leaders.

Out of touch and tainted by his association with the corrupt ruling elite, Tantawi has been vulnerable figure for many years — which is why his latest "slip-up" has sent the vultures into a feeding frenzy. Far from exposing antisemitism or lunacy amongst his critics, the handshake controversy has really laid bare the growing distance between Egypt's state-sponsored religious bureaucracy and popular Islam from below. Tantawi has learned the hard way what it really means to shake, rattle and roll.