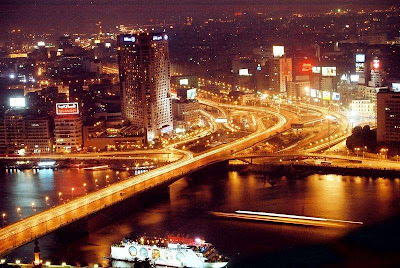 Anyone who has passed through the Middle East during the Muslim holy month of Ramadan will have taken one visual memory home with them: the sight of row upon row of lights – flashy, fizzy, gaudy and kitsch – dominating the streetscape at every turn. After sunset in Cairo, when the day’s long fast finally comes to an end and families join together to eat a giant iftar (breakfast) and settle down in front of the TV, it often feels like the whole of this ancient city has been draped in neon. But this year the festive bulbs weren’t quite so ubiquitous, thanks to a series of power cuts that plunged parts of the Egyptian capital into total darkness – and which has left the country’s beleaguered government scrambling around for a new set of energy solutions.

The outages, which brought protestors out onto the streets in many parts of the country, were partly a result of 2010’s exceptionally hot summer (temperatures regularly topped 40°c in major cities, driving up the use of air-conditioners), and partly a consequence of Ramadan, when a great deal of economic activity shifts to the night-time hours. But they also underlined a long-term crisis at the heart of Egypt’s energy policy – the growing gap between domestic demand for power and the country’s ability to supply it. With a demographic explosion increasing electricity usage up by 13% this year alone, it’s becoming painfully clear that the existing energy infrastructure, which has been underfunded for decades, in creaking dangerously under the strain.

That’s why government ministers have spent the last few weeks unveiling a blitz of controversial new energy projects, including the construction of a $1.5 billion nuclear reactor on the Mediterranean coast in an area that had been earmarked for luxury holiday resort development. They’ve also thrown open Egypt’s waters to deepwater drilling, of the kind that led to the Gulf of Mexico oil spill back in April. Shut out of US oil and gas fields by President Obama’s moratorium on deepwater drilling, many companies are now setting up shop in Egypt instead; Transocean, the firm that owned the fateful Deepwater Horizon oil rig, has already been operating in Egypt for years, whilst BP has just inked a fresh deal with the Egyptian government that will see it extracting 900 million cubic metres of gas a day out of the Mediterranean seabed from 2014 onwards.

It’s all happening a bit too swiftly for the likes of Issandr El Amrani, a blogger and columnist who thinks there hasn’t been enough scrutiny of the potential environmental risks involved with deepwater drilling. Earlier this year an oil rig accident near the Red Sea resort of Hurghada gave Egypt a brief taste of the damage that can be caused by offshore energy extraction; because Egypt lacks the economic clout of the US, argues El Amrani, “it is all the more urgent to have a serious debate about the costs and benefits of deepwater drilling.”

But there could be an alternative way forward in Egypt’s drive for energy security, and it lies in the baking sunshine and fast-blowing winds that sweep across this desert nation with remarkable consistency. “Egypt’s potential to be a centre of renewable wind and solar energy in the Middle East is huge,” says Engineer Samir Hassan, Director of RCREEE, an independent renewable energy think tank based in Cairo. Wind speeds in the Gulf of Suez average 9-10 metres a second, far higher than those recorded at similar sites in Europe, and the World Bank has just approved a $210m loan which will help Egypt develop 10 GW of wind energy by 2022. Meanwhile the country’s first solar farm should connect to the grid within the next six months. With Egypt’s current reserve of fossil fuels set to run dry within 30 years, there’s no time to waste when it comes to the expansion of alternative energy.

“We’re not a rich country and we don’t have the luxury to sit around talking about this issue,” warns Engineer Hassan. “We need to develop new sources of energy now.”
Posted by Jack Shenker at Sunday, September 12, 2010