The 6 April clashes in Cairo reveal Mubarak's vulnerability, and ElBaradei's celebrity clout can help those below take advantage 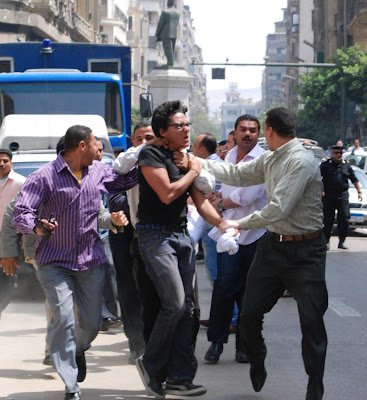 He looked to be in his early 20s. With his shirt ripped open and blood trickling down one side of his face, it took all the energy he could muster to momentarily writhe free of the six thugs dragging him off to a police truck and issue a final, desperate appeal to the stunned tourists watching from the other side of the street.

"This is the real Egypt!" he yelled as the plainclothed security forces hauled him back down to the ground. "Go back and tell your countries what democracy in Egypt really looks like!"

I don't yet know his name, though it can be found somewhere on the list of 92 detainees locked up by the Egyptian state on Tuesday for having the temerity to stand outside parliament and peacefully call for free and fair elections and an end to arbitrary emergency rule.

As popular landmarks in central Cairo became locked down under police occupation on Tuesday, I witnessed one unarmed demonstrator after another being viciously assaulted by riot police and undercover government muscle; women were thrown to the ground (one had her arm broken), youths were hit on the head with truncheons, and journalists – myself amongst them – were grabbed, punched and in the case of some female colleagues, groped, all in an effort to relieve them of their cameras and notebooks.

Fighting sceptics with sticks, fists and bullets has become the stock response of a government that affirms its growing lack of legitimacy with each cracked skull and handcuffed wrist. The question for activists now is how to capitalise on that weakness, as momentum builds towards the forthcoming sham elections.

It's a question that inevitably draws in the former head of the UN nuclear watchdog, Mohamed ElBaradei, who has emerged as an unlikely focal point for disparate anti-Hosni Mubarak mobilisations since his return to Egypt earlier this year, and who declared Tuesday's events to be "an insult to every Egyptian".

ElBaradei has garnered an unusually large amount of international (and domestic) media attention in recent weeks due to his diplomatic credibility on the world stage. It's a journalistic obsession which some Egyptian campaigners feel understandably miffed at considering the long and brave heritage of pro-democracy crusaders in the country who have struggled for years to win any meaningful coverage of their struggle, and even ElBaradei's supporters recognise the dangers of focusing on the "one-man saviour" narrative too intensely.

"What's happening in Egypt is much more than the ElBaradei story," bestselling author Alaa al-Aswany told me earlier this week. "He symbolises everything we're fighting for, but he came in the night – the struggle has been going on all day."

Prominent blogger and activist Hossam El-Hamalawy went further when he said: "For me the issue is not about ElBaradei or the presidency ... whoever comes and heads the state under its current structure is going to behave more or less like Mubarak. I'm not interested in cosmetic changes; I want to see change from below."

What's interesting, though, is that to a large extent ElBaradei agrees. In the Guardian's exclusive interview with the Nobel Peace Prize winner last week, he told me that "change will have to come from within the country ... there is no one coming in on a white horse that is going to [do that] for you." In all his public statements, the 67-year-old has bent over backwards to insist that his aim is not necessarily to run for office, but rather to use his influence to create enough political space in this most moribund of political landscapes to enable change from below to flourish. And history is on his side.

Egypt's anti-government protests under the three-decade reign of Mubarak have waxed and waned in cycles, as Rabab El-Mahdi has demonstrated, and each cycle has helped build the conditions necessary for the next one to follow. Over the past decade, for example, demonstrations supporting the second Palestinian intifada in 2000 gave activists a presence on the street for the first time in many years, which emboldened campaigners to ramp up their activities three years later in response to the US-led invasion of Iraq, culminating in a 40,000-strong civilian occupation of Cairo's central Tahrir Square and the widespread adoption of the motto "el-shari' lin" (the street is ours).

The police response in 2003 led many political groups to start directly addressing the injustice of Mubarak's presidency rather than simply taking issue with specific policies pursued by his cabinet, and future protests now made this a central pillar of the campaign.

Since then we've seen the Kifaya (enough) movement coalesce around the constitutional amendments of 2005, followed by a critical challenge by the judiciary to government vote-rigging and the more recent mushrooming of workers strikes and sit-ins aimed at resisting the state-led assault on their pay and conditions (as well as exposing the shallowness of government boasts regarding economic growth and neoliberal-orientated stability).

At each stage no single segment of society or one leading political actor has been the sole or even primary catalyst for broad-based regime dissent. Instead, it has been the interplay of specific circumstances, domestic structural crises and a series of overlapping, mutually reinforcing grassroots initiatives that has heralded outbreaks of activism – often with rogue sections of the fragmented elite playing a part as well.

If ElBaradei can use his intellectual and celebrity clout to help prise open a crack in the political system, there's no reason why a myriad of different, bottom-up groupings – including the 6 April youth movement that organised Tuesday's protest – can't take advantage of that.

Tens of millions of Egyptians have been left disenfranchised and alienated from an entrenched leadership focused relentlessly on self-enrichment and self-preservation. The majority are reluctant to publicly express their opposition but as El-Mahdi points out, when private hatred of the elite runs so deep even minor shocks can blow the most seemingly unshakeable of cabals wide open and generate a fast-spreading bandwagon of opposition.

Oppressive autocracies the world over have a dizzying array of tactics in their arsenal to cling on to power – from media manipulation to strategic support from superpowers – and it is only when they are feeling at their most vulnerable that the basest of these tactics, naked violence, is resorted to. Tuesday's clashes indicate that in Egypt those vulnerabilities are bubbling to the surface; both ElBaradei and the grassroots campaigners below him are in a position to take advantage.

Posted by Jack Shenker at Thursday, April 08, 2010 No comments: Links to this post 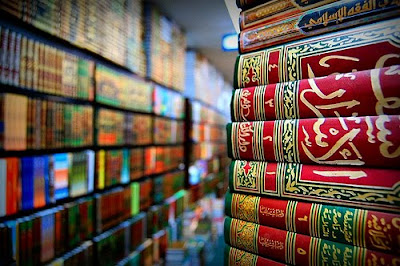 The arrest and disappearance of Ahmed Mahanna has fuelled fears among opposition activists that the government is stepping up its crackdown on dissenters as ElBaradei's campaign for political reform gathers momentum.

"We're fearful for the safety of all the young supporters who are campaigning for genuine democracy," said Alaa al-Aswany, the bestselling author of The Yacoubian Building who has backed ElBaradei's call for change. "Those that are famous are in a position to defend themselves against the regime, but ordinary people are open to being victimised by the government."

ElBaradei, a Nobel Peace prize winner who has emerged as an unlikely challenger to the 28-year rule of President Hosni Mubarak, has spent the last few days ramping up his public appearances after an interview with the Guardian last week in which he called on the west to end its support for Egypt's "sham" democracy and other oppressive Arab regimes.

The 67-year-old used his online Twitter feed to condemn Mahanna's incarceration, claiming "the detention of a publisher of a book about me and my ideas of reform shows a repressive regime afraid of its own shadow." Mahanna, who runs the Dawan publishing house and also works as a blogger, published a book last month by Egyptian journalist Kamal Gebrayal entitled ElBaradei and the Dream of the Green Revolution.

According to the Arabic Network of Human Rights Information (ANHRI), Mahanna's house was raided by security forces at dawn on Saturday. The publisher has not been traced, but an Egyptian official confirmed to local media that he had been placed under arrest and that copies of the book were being confiscated. "The housebreaking and arrest of a publisher for a book about ElBaradei ... clearly shows the intention of the government to gag all dissenting voices," said ANHRI in a statement on Saturday.

ElBaradei has whipped up a media storm since his return to Cairo in February thanks to his highly public criticisms of the ruling NDP party and repeated demands for a "constitutional revolution" in one of the region's most stagnant political landscapes.

On Friday hundreds of supporters flocked onto the streets in the Nile Delta town of Mansoura, where ElBaradei launched the first stage of a national tour designed to spread his message of change.

"What I saw today doesn't need words and it reveals an overwhelming and burning desire for change among the Egyptian people," he announced to cheering crowds. "We are all partners in change, which won't take place until each one of you feels that he is responsible for change."

Posted by Jack Shenker at Sunday, April 04, 2010 No comments: Links to this post