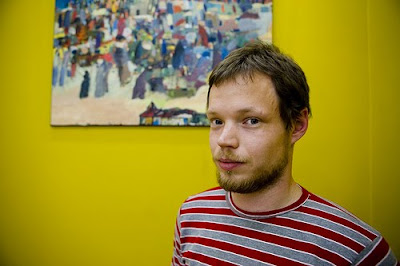 I don't normally post anything but links to my own articles up here, but I want to draw attention to the Egyptian authorities' decision to prevent Per Bjorklund from entering the country in which he has lived and worked for some time. The news broke yesterday that Per, one of the best, most courageous foreign journalists operating in Cairo, had been held at the airport and is reportedly going to be sent on a plane back to Europe tomorrow.

Per has led the way amongst the international journalists here in covering the ever-expanding strike wave which is threatening to destabilise the government and provide a rare opening of democratic freedom within Egyptian society. As Sarah Carr observed, "he is one of the few journalists I know who actually gets off his arse and goes to situations which he knows won’t make headline news, rather than relying on phone calls and/or Twitter ... in short he gives a shit." Anybody trying to get their head around one of the most important social movements unfolding in the Middle East today has Per to be thankful for, and that includes all the other foreign correspondents such as myself who have relied on his work in the past.

The dangers faced by foreign journalists in Egypt pale into insignificance compared to the repression meted out by the government to its own members of the press and blogosphere. In that light it may appear perverse to highlight Per's situation when I haven't directly commented here before on similar state-led attacks on free speech targeted at Egyptian writers. My only defence is that Per is a friend and his excellent reports have helped expose the realities of Egypt's dysfunctional governing regime - and the growing resistance to it - to the world.

All too often there is a collective descent into 'pack journalism' on the part of the international media, an endless re-churning of recycled stories from this corner of the planet that fit neatly into the status quo. Breaking out of the prism is a daunting challenge and brings very little money or recognition; it's always easier to write and sell articles which conform to editors' pre-existing assumptions about the subject. Per is one of those that takes on that challenge with relish, and the fact that the Egyptian government feels compelled to bar him from their borders says a great deal about his integrity - and their own insecurity.