Why millions of disabled people in Arab and north African societies have to fight for more than just recognition. 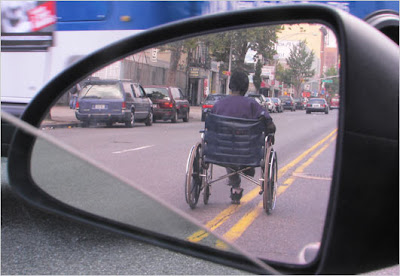 -Taken from the Guardian's 'Comment is Free'
-Cairo - December 2009

Earlier this year I played a football match in Cairo against an Egyptian team made up entirely of deaf players. It was a eerie experience; under the dull roar of the 6 October flyover, which carves through the centre of the city and across the Nile, our match was played out in almost perfect silence – the normal breathless shouts of encouragement, congratulation and annoyance between teammates all replaced by dazzlingly fast sign language. What was even stranger was the reaction of my Egyptian friends later that evening – most simply didn't believe that there could be such a thing as a deaf football team, and even the ones that did thought the idea hilarious.

The memory of that game came back to me last week while I was speaking to Hanaa Helmy, an Ashoka fellow who runs a centre for children with cerebral palsy in a south Cairo suburb. "People often ask me why I bother," said Helmy. "The idea that children with cerebral palsy could be self-dependent and integrated with Egyptian society is completely alien; most people think they'd be better off dead."

The challenges faced by the hard of hearing and those who suffer from cerebral palsy are scarcely comparable, but both point to a common factor: the barriers faced by disabled people in the Middle East who want to exercise a degree of self-expression, creativity and personal agency over their lives.

These barriers are partly due to inflexible institutional structures, but also to the widespread social attitudes that stereotype and marginalise those who are physically or mentally different from the majority. It's not just that the disabled are often invisible – part of what the latest Arab Human Development Report labels "the vulnerability of those lost from sight" – but also that they are conceived of only in terms of their disability.

According to the World Bank, there are up to 30m disabled people in the Middle East and north Africa region, where – more than in the west – disability and poverty are "inextricably linked". In Egypt alone, there are up to 4 million people who need some sort of rehabilitation for a disability, and maybe the same number again who do not appear in the official figures. As in neighbouring Arab countries, those who fall into this category are far more likely than the rest of the population to join the ranks of the absolute poor – just as the absolute poor are far more likely to become disabled.

Studies have shown that access to healthcare, education and jobs all dissipate after the onset of a disability here in Egypt, not to mention the concurrent physical checks on activity (as any visitor to Cairo will testify, the city's assorted potholes, badly parked cars, water-gushing air conditioners and inopportunely placed pavement shisha smokers make it hard enough to walk through the streets on two legs, never mind navigate them with a wheelchair).

Government legislation theoretically protects the rights of disabled people in Egypt but in common with the way it treats most of its citizens, President Mubarak's autocratic regime rarely matches its rhetoric with concrete action. True, the rule on large firms making up at least 5% of its workforce from the ranks of the disabled does throw up some interesting anomalies – one KFC branch in Cairo is staffed entirely by deaf workers – and the recent case of a policeman who carried out a horrific assault on a mentally disabled man in Alexandria being brought to justice was cited by some as evidence that official concern for those with disabilities was on the rise. But on the whole there is a deplorable lack of institutional support for those who fall between the cracks of the mainstream health and education systems.

For once, though, not all of society's ills in this area can be pinned on Egypt's dysfunctional ruling party. As the sentencing of Colonel Akram Suleiman (the attacker of the disabled man in Alexandria) showed, not only is there a strong taboo about admitting the presence of disability within families, but when the existence of disabled people is acknowledged they are usually viewed either as wretched creatures deserving of charity or as miraculous achievers who overcome all the odds – but never as anything in between. As the NGO Handicap International says in its profile of Egypt, "ordinary" Egyptians "hardly consider [disabled people] as regular capable citizens having their own strengths and weaknesses, rights and duties".

The idea that disabled people are somehow detached from the common knowledge of what constitutes "ordinary humankind" – the normal experiences we all share of eating, drinking, learning, loving, having fun, experiencing sorrow, or indeed playing football – has formidable consequences. Psychologically, it prevents those with disabilities being taken seriously as independent agents, leaving them at the mercy of negative stereotypes.

Stars of Hope, a Palestinian NGO which promotes the rights of women with disabilities and also receives support from the Ashoka foundation, says that disabled women are often seen as "childlike, dependent, incompetent, asexual, unable to take on the role of worker, sexual partner, or mother. As a result, they are left confused about who they are, and who they can become."

The problem though, as Brian Whitaker points out in his recent book What's Really Wrong With the Middle East, is that the idea of society being vibrant, pluralistic and above all a forum in which individuals can legitimately carve out their own personal thought and space in their own manner – and still be an accepted part of the community – is one that is stubbornly denied through social norms inculcated through both the family and school systems. Educational models in the Arab World tends to encourage "submission, obedience, subordination and compliance, rather than free critical thinking"; in other words, children are taught that the best route to success is to accept their parents and schoolteachers vision of the world unquestionably and to learn it by rote.

It is little wonder, then, that the Middle East's disabled population struggle to be accorded the status of productive, self-expressive individuals that they deserve, but are instead diminished into caricatures. Government neglect of the disabled is unacceptable, but the real challenges start closer to home.
Posted by Jack Shenker at Saturday, December 05, 2009 1 comment: Links to this post