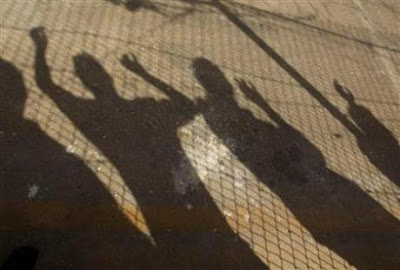 -Taken from the Guardian
-Rafah, on the Egypt-Gaza border - June 2010

-Follow the Guardian's live updates from the region here

From the sight of donkey carts trundling lazily down near-empty roads in the baking afternoon heat, you wouldn’t have thought this dusty patch of land lay at the centre of a vast diplomatic storm. Nor did the row of bored-looking customs officers sipping tea in the shade give any indication that their work was now commanding global attention. But the Rafah border crossing between Egypt and Gaza has long been a surreal place where rhetoric and reality rarely meet eye to eye.

In the end, the small trickle of Gazans who eventually made it out onto Egyptian soil spoke volumes about the dangerous predicament Egypt’s ailing leader finds himself in following Israel’s deadly assault on the Free Gaza flotilla earlier this week. Caught between the need to appease growing public anger at Israel’s actions on the one hand, and the necessity of maintaining his close relationship with the Jewish state on the other – a friendship which opens the door to more than $2 billion of annual American aid, money on which many analysts believe Mubarak’s unpopular regime depends upon for survival – the Egyptian government has found itself incapable of living up to its own hype.

“No one is optimistic that this will lead to any kind of permanent solution,” said one UN official making his way from Egypt to Gaza. “The border has been opened for political purposes alone. Such an opening is critical for humanitarian reasons, but it won’t last.”

Indeed at times the level of activity at Rafah terminal dropped so low that it was hard to discern whether the border had really been opened at all. Several aid trucks did make it into the Palestinian territory over the course of the morning, including a dispatch of power generators from the Egyptian Red Crescent, and hundreds of Gazans who had been staying in Egypt did successfully manage to return home. But traffic in the other direction, both human and cargo, remained barely visible.

Officials believe that no more than three busloads of passengers had made it across to Egypt by early evening, leaving an estimated three thousand Gazans waiting on the other side. Some pinned the blame on bureaucratic delays on the Gazan side, where Hamas officials were reportedly trying to implement a new system of prioritising who should be allowed to cross first. Others insisted that Egyptian intransigence was at fault.

Most of those who reached Egypt were in need of medical attention, but a smattering had more cheerful reasons for making the trip. One couple were en route to their daughter’s wedding in Dubai and were overjoyed at having navigated their way through a dizzying maze of officials and security checks. “There are many buses backed up on the other side filled with people who want to come through,” explained the father of the bride. “We were lucky to make it.”

The lucky were few and far between, however. Mostly the arrivals hall remained desolate, in stark contrast to the departures lounge which was periodically flooded with Gazans returning home from Egypt. Theoretically the Rafah terminal is already open two days a week to allow Gazan residents on the Egyptian side of the border to cross back over, but the buzz around today’s events fuelled a sharp rise in the numbers of those travelling. Many had taken the opportunity to stock up on supplies in preparation for their return to a space where items as innocuous as coriander and A4 paper are routinely blockaded by the Israelis.

Ramzi, a grocer from Jabalia, was clutching two brand new bicycles with him as he threaded his way through the crowds. “I was over in Egypt visiting my father who’s in hospital there, and I thought I’d pick up some presents,” he grinned sheepishly. Trolleys laden with mattresses, flat-screen TVs, air-conditioning units and even full size refrigerators all made their way towards buses waiting to ferry passengers across no man’s land and back onto Palestinian territory.

“Any product you can dream of, you’ll find it here,” confided one Egyptian customs officer, gesturing towards a queue of Gazans waiting to have their passports checked.

Not everyone could join the import bandwagon. Seham Mohammed Hamdani, a mother of two from Gaza who now lives in the Egyptian city of Ismailia, had rushed to the border this morning in the hope of seeing her son and daughter for the first time in 13 years; they live on the other side of the crossing and now both have children of their own. Due to apparent irregularities in her paperwork, Seham has been unable to travel back into her homeland for over a decade, whilst her children are not allowed to leave it. After hearing about Mubarak’s instructions to open the Rafah crossing yesterday, Seham believed she would finally be reunited with her family, but the Egyptian border guards once again turned her away. “It’s the end of hope,” she sighed on her way back. “It’s up to Mubarak now to resolve our plight.”

Seham is not the only one looking to the 81 year old for answers as the fallout from Israel’s naval attack continues. At a time when he is already fending off a wave of dissent over spiralling economic hardship and the consistent stalling of political reforms, and with presidential elections looming in 2011, this reminder of Egypt’s long-term role as an accomplice in Israel’s siege of Gaza could not have come at a worse time for Mubarak, one of the region’s most entrenched autocrats. Israel remains the president’s biggest political vulnerability; judging by the strange half-measures which constituted today’s Rafah border ‘opening’, extricating himself from this mess could prove to be one of his toughest challenges to date.
Posted by Jack Shenker at Wednesday, June 02, 2010