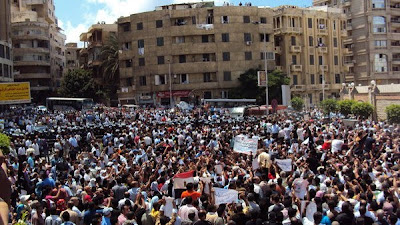 Mohamed ElBaradei, the former head of the UN nuclear watchdog, joined about 4,000 Egyptians at a rare large-scale street protest today, in his most direct challenge to President Hosni Mubarak since returning to the country earlier this year.

The Nobel laureate turned opposition figurehead joined the sit-in in Alexandria over the case of a man allegedly killed by plain-clothes policemen.

Numerous witnesses say Khaled Said, 28, died after being kicked and punched by the officers before eventually smashing his head against a marble shelf in an internet cafe on 6 June. Security officials claim Said died of asphyxiation after he swallowed a packet of narcotics hidden under his tongue.

The officers dragged Said into their car and drove off, before returning to dump his body on the street in front of the cafe, the witnesses said.

ElBaradei, who has said he will consider challenging Mubarak for the presidency next year if conditions are free and fair, called the incident an "egregious humanitarian violation" which revealed a "lack of sanctity of human life".

Human rights organisations have condemned the attacks and the botched investigation that followed it. According to Human Rights Watch, which is calling for the individuals involved to be prosecuted, this has so far involved two highly-flawed autopsies, a lack of proper evidence-gathering and a series of misleading statements from the Interior Ministry accusing the victim of being a wanted criminal, an accusation which Said’s family deny. Meanwhile the two officers responsible for the incident remain on active duty.

“Even if Khaled Said had been wanted in connection with some earlier offense, that does not give license to police to attack and murder him in cold blood,” said Joe Stork, deputy Middle East and North Africa director for the organisation. “The Interior Ministry statement is grossly irresponsible, implicitly condoning police brutality.”

Graphic photos of Said’s mangled face have spread quickly across the internet, prompting a series of protests in Cairo and Alexandria which have themselves been forcibly broken up by police violence. Today's protest was the largest so far.

“These pictures are a rare, first-hand glimpse of the routine use of brutal force by the Egyptian security forces, who expect to operate in a climate of impunity, with no questions asked," said Amnesty International in a statement. "“The Egyptian authorities must reign in their security forces. [They] should know that the eyes of the world are increasingly on them, and the pictures online mean that they cannot avoid conducting a thorough investigation with another whitewash.”

Street demonstrations in Egypt are not uncommon, with regular protests over food prices and low wages, but most of them remain very small and are quickly broken up by riot police. The size and scale of today's events in Alexandria, a stronghold of the opposition Muslim Brotherhood movement, suggest that Said's death has struck a chord.

ElBaradei and a group of other prominent opposition figureheads – including former presidential candidate Ayman Nour, who was jailed after his unsuccessful attempt to unseat Mubarak in 2005 – arrived in Alexandria earlier to visit Said's tomb and meet his family. After Friday prayers, the protesters congregated at a mosque where they were met by a huge contingent of riot police.

Egypt has been under a state of emergency law for 29 years, offering effective immunity to many elements of the police and security services.

The death of Said, who has become known as the "emergency law martyr", is viewed by many as a potential turning point for the growing opposition movement.

ElBaradei is believed to have left the protest early after hundreds began chanting anti-Mubarak slogans. The 68 year old was keen to avoid accusations that he was exploiting Said's death for political gain and had called for the protest to be a silent one - but his wishes were ignored as public anger at the authorities boiled over.