Egypt: 18 days that shook the world 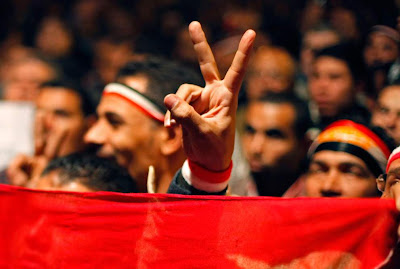 In the early afternoon of January 25th 2011, I found myself on the Nile corniche north of Qasr El-Nile bridge, alongside about a thousand pro-change protesters. My companions and I had already been watching extraordinary scenes unfold across the city all morning, particularly in the populous northern neighbourhoods of Bulaq and Shubra El-Masr, where small, mobile crowds of demonstrators swept through the streets with astonishing ease, chanting 'down, down Hosni Mubarak' and exposing a simple but explosive truth to nonplussed bystanders: behind the facade of a supposedly-impregnable security apparatus, there really was nothing to stop Egyptians standing up for their rights and making their voices heard.

Mubarak's security forces were taken by surprise that day; thinly-strung and overstretched, they were powerless to stop the dozens of parallel demonstrations erupting all over the capital and beyond. By early afternoon though, they had rallied, and were now stationed in their hundreds across the road in front of the derelict Nile Hilton - rows of amin markazi, helmeted and shielded to the bone. The protesters didn't charge, didn't fight, didn't flinch - they just kept on marching, heads up and eyes forward. And against the sheer weight of human fearlessness, the security forces melted away. At that moment my newspaper called me and asked for an update.

I remember looking around me at the gleeful abandon of demonstrators running from one part of the street to another - revelling in the giddy sensation of having reclaimed their public space from the state. I saw the uncertainty and terpidation etched onto the faces of senior police officers, and at the new columns of protesters streaming in from across the river. And I knew then with absolute certainty that for Mubarak, nothing was left. I didn't know how long it would take, or what horrific violence might unfold in the interim, but a fear barrier had been broken, and for a president whose power rested solely on a bed of fear - fear of the police, fear of the government, fear of extremism, fear of instability - this could only mean the end. 'A revolution has begun,' I told my editors.

18 days later, on February 11th, newly-appointed vice president Omar Suleiman appeared on state television for twenty seconds and announced that Mubarak was stepping down. This is a summary of my writing throughout that period, as our emotions fizzed about like home-made firecrackers and Egyptians took it upon themselves to not just knock something down, but build something new in its stead as well, something that would inspire and amaze well beyond the country's borders. This unfinished revolution has a long and turbulent road ahead, but that only makes the steps taken so far all the more incredible.

Many of the articles below were written with colleagues, including Peter Beaumont and Chris McGreal. Photos are taken from The Atlantic.

Egypt's young wait for their lives to begin - and dream of revolution (The Observer)
In Cairo, as in places all over the country, all eyes are fixed on the drama that is unfolding in Tunisia. Jack Shenker travelled across Egypt and heard people increasingly asking: could it happen here? 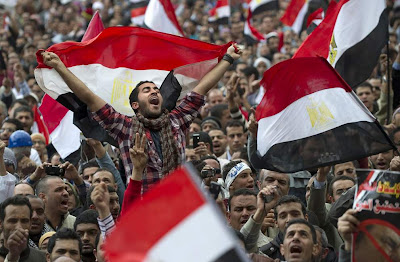 Bloodied and bruised: An eyewitness account from inside Mubarak's security apparatus (The Guardian)
The Guardian's man in Cairo tells of his beating and arrest at the hands of the security forces

Egypt protesters prepare to return to the streets (The Guardian)

Egypt braces itself for biggest day of protests yet (The Guardian)
Pressure builds on the president, Hosni Mubarak, as banned Muslim Brotherhood backs protests

Mohamed ElBaradei lands in Cairo: 'There's no going back' (The Guardian)
Supporters insist Egypt's people will make change from below

Egyptian protesters are not just facebook revolutionaries (The Guardian)
The internet has galvanised dissidents, but the key events that fuelled the uprising happened offline

Egyptian government on last legs, says ElBaradei (The Guardian)
Exclusive: Mohamed ElBaradei says he is sending a message 'to the Guardian and to the world'

Egypt's day of fury: Cairo in flames as cities become battlegrounds (The Guardian) 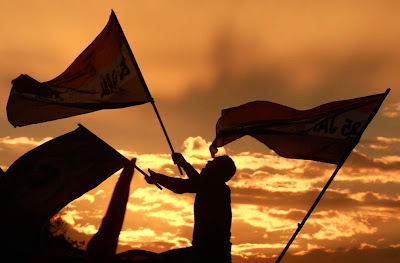 Hosni Mubarak in frantic bid to cling on to power (The Observer)
President appoints intelligence chief to vice-president post as streets ring out to cry of 'Mubarak, your plane is ready'

'Mubarak must fall' - across Cairo, the protesters' message is the same (The Observer)
Sacrificing government ministers is not enough: for the people to be satisfied, the president must be deposed

From the young to the old, the voices of the Egyptian rebellion rise (The Observer)
'The youth are motivated to keep going, and the old political leaders have been left behind'

The mosque that became a hospital (The Guardian)

The Muslim Brotherhood: protesters play down Islamist party's role (The Guardian)
Opposition movement vows to 'respect the will of the people' if Mubarak's regime falls

Protesters refuse to leave the streets until Mubarak steps down (The Guardian)
Emboldened by the army's support, people pour on to the streets to demand the president's departure

The president vs the people (Monocle)

Tahrir Square battleground: 'These people tried to slaughter us last night' (The Guardian)
Anti-Mubarak protesters in Cairo fight to hold square littered with bricks and burnt-out vehicles after night of bloodshed

US hatches Mubarak exit strategy as Egypt death toll mounts (The Guardian)
White House involved in discussions to remove Egyptian president, in spite of Mubarak claims that he is on staying on

Mubarak's departure will not be enough to quell uprising (The Guardian)

Business as usual for Egypt's rich - but their children are out protesting (The Guardian)
In New Cairo – a satellite city to the east of the capital – life, on the surface at least, seems to have barely changed

The Muslim Brotherhood uncovered (The Guardian)
In an exclusive Guardian interview, Egypt's Islamist opposition group sets out its demands

Egypt's economy suffers as strikes intensify (The Guardian)
Thousands of workers walked out from their jobs, piling pressure on a political leadership already rocked by protests

Egypt: Day of rumour and expectation ends in anger and confusion (The Guardian)
Vast crowds in Tahrir Square expected a victory party after the departure of Mubarak – but it was not to be 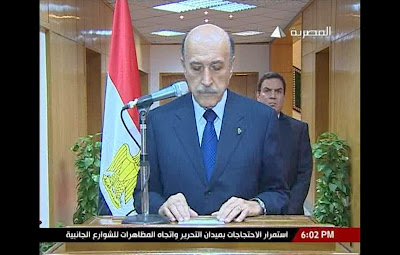 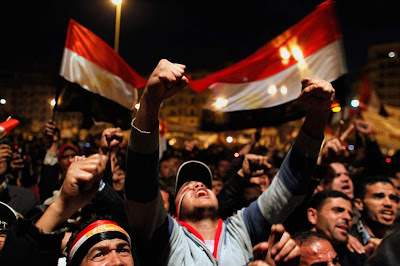 Egypt: How the wheel of history turned (The Observer)
By overcoming their fears and defying the man whose regime had terrorised them for 30 years, Cairo's protesters not only drove out Hosni Mubarak, they have changed the Arab world

Young Arabs throwing off the shackles of tradition (The Guardian)
The frustrated generation at the heart of the protests tell how their progress is being stifled by unemployment, corruption and cronyism

Egyptian protester: Tunisia shows us something different was possible (The Guardian)
Frustrated Cairo graduate Shady Alaa El Din wanted to leave Egypt because of the lack of freedom and opportunity, but protests in Tahrir Square have made him feel capable of bringing change

Egypt's press undergoes its own revolution (Media Guardian)
Does the political upheaval in Egypt spell the end of state-controlled media?

The revolution, violence and KFC: In conversation with Abdel Latif Al Menawy
Transcript from interview with the head of Egyptian state news

Egypt's revolution: The T-shirts, the tat, and the tremendous struggle that continues (Monocle) 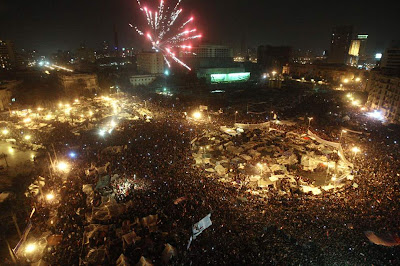