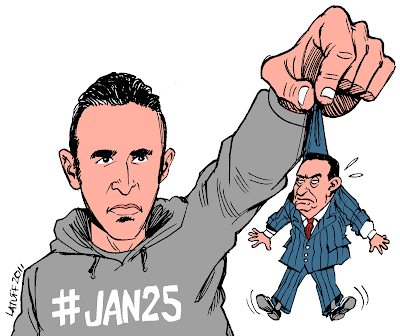 Egypt's authoritarian government is bracing itself for one of the biggest opposition demonstrations in recent years tomorrow, as thousands of protesters prepare to take to the streets demanding political reform.

An unlikely alliance of youth activists, political Islamists, industrial workers and hardcore football fans have pledged to join a nationwide "day of revolution" on a national holiday to celebrate the achievements of the police force.

With public sentiment against state security forces at an unprecedented level following a series of high-profile police brutality cases and the torture of anti-government activists, protest organisers are hoping that a large number of Egyptians will be emboldened to attend rallies, marches and flash mobs across the country in a sustained effort to force concessions from an increasingly unpopular ruling elite.

In a move that suggests the uprising in Tunisia may be spreading to other parts of the Arab world, Tunisian activists announced they would be holding their own protests in solidarity with their Egyptian counterparts, while many Egyptians plan to wave Tunisian flags. Parallel protests are also scheduled to take place outside the Egyptian embassies in London and Washington.

Demonstrators are calling for the sacking of the country's interior minister, the cancelling of Egypt's perpetual emergency law, which suspends basic civil liberties, and a new term limit on the presidency that would bring to an end the 30-year rule of President Hosni Mubarak, one of the Middle East's most entrenched dictators.

State security officials have branded the protests illegal, and said that those taking part will be dealt with "strictly".

"I'm answering a call that began online, a call to stand up against police brutality on the day the regime wants us to celebrate their so-called achievements," said Salma Said, a 25-year-old activist and blogger who plans to protest in Cairo.

"Of course demonstrating against police brutality means demonstrating against Mubarak himself and his whole regime, because they are the ones who created this system. Momentum is gathering really, really fast; friends I haven't spoken to in years have been ringing me up, promising to come down."

Tomorrow's events, dubbed a "day of revolution against torture, corruption, poverty and unemployment" by protest leaders, were initiated by two dissident movements, both based online. One is dedicated to the memory of Khaled Said, an Alexandrian man beaten to death by police last year, while the other, "6 April", is a youth group named after the date of an uprising two years ago in the Nile delta town of El-Mahalla El-Kubra, in which three people were killed by police.

After initially dismissing the protests, the Muslim Brotherhood - Egypt's largest organised opposition force - has now said it will back the demonstrations symbolically, although it has not called on its supporters to take to the streets. Strikes are expected by workers in several parts of the country, including Mahalla, and a number of Egypt's traditional opposition parties and prominent public figures have pledged support.

Mohamed Adel, a spokesman for 6 April, said the broad range of participants distinguished tomorrow's action from previous protests. "It will be the start of something big," he told the Egyptian news outlet Al-Masry Al-Youm.

In a sign of how seriously the Mubarak regime is taking any challenge to its authority following the downfall of Tunisia's president Ben Ali, counter-protests are being organised under the banner of "Mubarak: Egypt's security". Organisers say they want to express their rejection of the "destruction of state institutions" by the opposition, raising fears of violent clashes on the ground.

"Regardless of how many people turn up, these protests will be highly significant," said Nabil Abdel Fattah, a political analyst at the semi-official Al-Ahram Research Centre. "Those confronting the regime on Tuesday will be the sons and daughters of virtual activism - a new generation that has finally found something around which they can unite and rally.They are the product of a government that has never offered them any ideological vision to believe in, and now they have themselves become a symbol of contemporary Egypt."