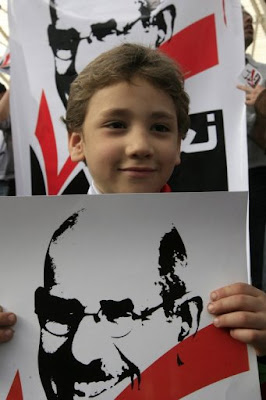 -Taken from the Guardian
-Cairo - February 2010

One of the world's longest running authoritarian regimes was bracing itself for a challenge last night, as the former UN nuclear weapons chief, Mohamed ElBaradei, returned to a hero's welcome in his native Egypt having vowed to fight for change.

More than 1,000 supporters converged on Cairo International airport to greet the 67-year-old, who stood down as head of the International Atomic Energy Agency last year and is seen as a potential competitor to the three-decade rule of President Hosni Mubarak in next year's elections.

Waving flags and banners and singing patriotic songs under the watchful eye of the security services – who had warned protesters to stay away – the crowd called on ElBaradei to declare his candidacy for head of state. "He is the last and only hope Egypt has," said one onlooker. "This used to be a great nation. ElBaradei will make it great again."

ElBaradei, who won the Nobel peace prize in 2005, has indicated that he would consider running for the presidency if conditions were sufficiently free and fair.

It is the latest chapter in the remarkable story of a man with, at present, no political party, no official candidacy, and a stated desire to do little more on his homecoming than to spend some relaxation time with his family. Yet since the highly-regarded diplomat ended his 12-year stint with the IAEA he has been somewhat reluctantly transformed into a dissident leader-in-waiting by the disparate Egyptian opposition movement, uniting secularists, Islamists, liberals and leftists behind him.

Many analysts believe the 81-year-old incumbent Mubarak has been preparing to transfer power to his son, Gamal, a former banker who was the architect of many of the country's unpopular neoliberal economic reforms. ElBaradei's unexpected intervention, according to prominent columnist Fahmy Howeidy, has "upset those carefully-orchestrated plans".

The bestselling novelist Alaa al-Aswany said ElBaradei's return to Cairo has opened up "a new chapter in Egyptians' struggle to seize their rights to freedom and justice … in every way, and without any doubt, Dr ElBaradei has become the most important political phenomenon in Egypt right now".

Egypt's government takes a different view. Critics close to the government have labelled him and the campaign that quickly gathered momentum behind him as naive, traitorous and, in the words of the editor-in-chief of al-Ahram, the biggest government-controlled newspaper, "tantamount to a constitutional coup".

The attacks, however, seem to have done little to dampen ElBaradei's popular appeal. "He is an outsider, in a time when we can no longer rely on the insiders," said Abdul Rahman Yusuf, an activist poet who founded a website and a 60,000 strong Facebook group in ElBaradei's name, and who helped co-ordinate today's reception.

ElBaradei's apparent ambivalence over the role being thrust upon him appears not have damaged his credibility. "He is an accomplished statesman who is risking his whole reputation by plunging into the cesspool of domestic Egyptian politics," said Karim Medhat Ennarah, one of many who risked arrest by joining the gathering at the airport. "He's making an immense personal sacrifice in an effort to instigate political change in Egypt. That alone demonstrates his commitment to the cause."

If ElBaradei does decide to run for presidency, several obstacles stand in his way. A series of recent constitutional amendments effectively bar any candidates from outside the ruling NDP party from getting their name on the ballot paper.

As a result, revamping the legal framework surrounding elections in Egypt has become a cornerstone of ElBaradei's message to the Egyptian people, along with his call for a wholesale transformation of Egyptian values. "A new class, referred to as the nouveau riche, has appeared," he told the independent El-Shorouk newspaper last month. "The fundamental values in Egypt today are power and money, and not knowledge."

Amidst the hype though, there are those sounding a note of scepticism about ElBaradei's capacity to effect any meaningful change in a country where the western-backed regime regularly uses its extensive security apparatus to shut down any rival sources of power. "ElBaradei is popular compared to Mubarak in the same way Obama was popular compared to Bush," argues Howeidy. "Anybody would command support if they presented themselves as an alternative, but we will still never see ElBaradei installed as an official presidential candidate. The most important thing about the ElBaradei phenomenon is that is proves that there is such a thing as political choice, when all we ever hear from the regime is that there is no other choice but them. But at the moment the ElBaradei campaign is a website, and websites here and there won't change anything."

ElBaradei himself was unable to address his supporters upon landing in Cairo, after scuffles between police, reporters and demonstrators prevented him from exiting the terminal. He did, however, make a brief drive later through the waiting crowd outside, a sign that he may be cautiously embracing the sentiments of those who are backing him for the top. "I don't have a magic wand to wave and make our problems disappear," he said last month. "[But] if what I say reverberates with you and presents a way out for you, then I will work and struggle to realize that change. I will be in the front with you."

Job President of Egypt since 1981

Family Married to Suzanne Mubarak, and has two sons, Alaa and Gamal.

Early life Graduated from the Egyptian military academy (1949), advanced flight and bomber training in the Soviet Union. Director of the air academy from 1966-69. Appointed chief commander of the air force in 1972. Vice president from 1975 until President Anwar al-Sadat assassinated.

Job Decided against standing for fourth term as the International Atomic Energy Agency's director general. Stood down in November.

In office IAEA tenure is marked by Libya abandoning its weapons programme, efforts to rein in Iran and North Korea and tensions with the US over Iraq.

Once a roaring trade hub, Nepal is now among Asia’s poorest nations. But with huge hydroelectric potential and a prime spot between the world’s two fastest-growing economies, the Himalayan nation could soon regain some of its former glory. 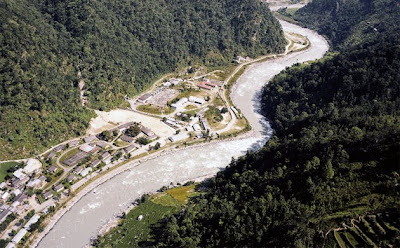 -Taken from Monocle (subscribers only)
-Kathmandu, February 2010
Posted by Jack Shenker at Monday, February 01, 2010 No comments: Links to this post