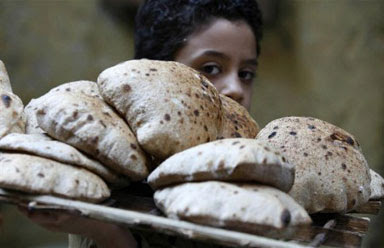 A snapshot of one Egyptian family struggling with the recent explosion in food prices:

Mohammed Araby, 50, lives in Shubra-al-Khama, a poor, congested suburb north of Cairo city centre. Every day he takes the company bus over to Nasr City, where he works as an accountant. In the thick Cairo traffic, the journey takes at least an hour each way. Mohammed is highly educated, with a degree in commerce from the University of Cairo, and has worked in this field for 32 years. After 15 years of service for his current company, Mohammed is paid LE 2000 [£200] a month, with which he has to support his entire family.

Mohammed’s wife, Hoda, is 46. They have been married for 24 years. After finishing school she also went into higher education, but now Hoda no longer works and instead looks after the family. The couple’s three children all live at home with them. Ahmed, 23, is the oldest. After two years of university, Ahmed has dropped out to try and find work in order to help support the family. Despite his academic qualifications, the only employment Ahmed has been able to secure is ad hoc work as a handyman or on building sites, which pays LE 20 [£2] a day. Ahmed’s younger brother Kareem is 20, and studying for career in the tourism industry. Mohammed and Hoda’s daughter, Omnia, is 13 and is at a government school. The whole family, including Mohammed’s elderly mother, aged 80, share a three-bedroom apartment.

Mohammed has never thought of himself as well-off, but in previous years he was able to save enough from his salary to give the family a few treats now and then. Last year, for example, he estimates that 70% of his income was spent on food and rent. The family used the extra cash for a summer holiday in Alexandria, and once a month they would have a picnic together or go out for a meal. Now, thanks to the rising food prices, these luxuries are a thing of the past. All of Mohammed’s salary goes on basic essentials, and he has had to sell his car to continue providing for the family. In addition, they have had to cut back on spending on Omnia’s education. Although her government school is free to attend, the families of pupils there are under great pressure to buy expensive textbooks and pay for private tuition to ensure that their children do well in their exams. But the Araby family no longer has enough money to adequately cover these costs, and so have had to make sacrifices to ensure everybody has enough to eat.

Mohammed believes food prices have, on average, gone up about 60% in the past few months. President Hosni Mubarak recently promised government employees a 30% wage increase but as he works in the private sector, Mohammed will not benefit from this. On the contrary, to pay for the salary hike the government has cut subsidies on a number of products; because of this, and the growing inflationary pressure on the economy, Mohammed’s income is declining in real terms. Mohammed and his colleagues are hoping they will be awarded a pay rise soon, but nothing has yet materialised. In the meantime there is no opportunity for extra overtime pay, as the work is simply not available.

Mohammed lays the blame for rising food prices solely at the feet of the government, which he describes as deeply flawed. Under President Mubarak, he says, the gap between rich and poor has become so great that “it is an impossible bridge to cross”. Mohammed has heard rumours that food prices will rise further at the end of this month, and is both despairing and angry at the prospect. He is particularly fearful for the future of his sons, who are entering the job market just as the economy is slowing. Despite this anger, he is opposed to the wave of strikes that has recently broken out in protest at the government, insisting that there are peaceful ways in which to object to the spiralling prices. He laughs when asked whether he considers himself middle-class. “Social class is undefined in modern Egypt,” he replies. “Even the bawwab [the doorman] has a computer and a mobile. There is no middle-class now. There is only the rich, and the rest of us, who are struggling.”

Here we look at their average daily diet during a working week:

Hoda used to be able to buy lots of dried food that could be stored for the week ahead, but now the family doesn't have enough money to do that and instead has to shop on a day-by-day basis. The cost of tomatoes and meat has risen by 50%, while most other vegetables have doubled in price.

The family would normally have bought some fruit for the children today as well as some sweets to share in the home, but now there is no money left over for these luxuries. Butter alone has gone up almost 70% in the past year.

Wednesday was the day that Mohammed and Hoda's three children would each receive a small allowance to spend on treat themselves on whatever they wanted. Now, with the cost of potatoes having almost doubled, the allowances have been stopped.

Once again, Hoda has had to chose between buying meat or fruit for her children. Today she has gone for chicken, the price of which has gone up 50%, leaving her with nothing left to spend on oranges or mangoes. The price of cheese, like most dairy products, has also skyrocketed – up 100% from last year.

It's the beginning of the Egyptian weekend and the family's food budget is exhausted. The cheapest oil they could find in the market has doubled in price from LE4 to LE8 . Hoda used to spend the weekend decorating the family apartment, buying new covers for the sofa and chairs, but that's now a thing of the past.

Posted by Jack Shenker at Wednesday, May 28, 2008 No comments: Links to this post