Mubarak adds fuel to the fire as football riots spread 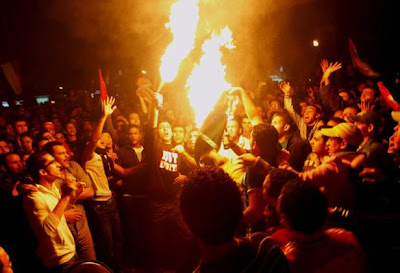 -Taken from 'The Observer'
-Cairo - November 2009
Egyptian President Hosni Mubarak ratcheted up the diplomatic tension with Algeria yesterday as football-related violence continued to spread across both countries. In a statement to the Egyptian parliament, he told cheering MPs that “Egypt will not be lax with those who harm the dignity of its sons.”
It is the president’s first public intervention in a row that has seen thousands of protestors flood the streets of both Cairo and Algiers and a wave of tit-for-tat reprisal attacks against Egyptian targets in Algeria, and vice versa. The trouble started when Egypt won a controversial World Cup qualifier against Algeria in Cairo last week, setting up a playoff between the two sides in Sudan to decide which country would progress to the 2010 World Cup finals in South Africa.
Earlier this week Egypt recalled its envoy from Algeria after expressing its ‘outrage’ and ‘denunciation’ at the treatment faced by Egyptian fans in Khartoum, where Algeria won the match by a single goal. Despite appeals for calm by the General Secretary of the Arab League, Amr Moussa, rioting has since spread to both capitals. In Algiers the offices of Egypt’s national airline were destroyed, whilst in Cairo hundreds of Egyptian security forces did battle with demonstrators attempting to reach the Algerian embassy, which was reportedly hit by fire-bombs. Parts of the city remain under police lockdown.
Yesterday’s speech by Mubarak did nothing to ease the frenzy, as he swore to protect the rights of Egyptians in the face of violations and transgressions against them. “The welfare of our citizens abroad is the responsibility of the country,” he added. It followed a television interview with the president’s son, Alaa Mubarak, in which he labelled the Algerian fans ‘mercenaries’ and ‘terrorists’.
However there were signs last night that a public backlash against the government’s handling of the football storm was gaining strength. Mubarak’s autocratic regime, which has faced a number of popular protests by Egyptians over spiralling food prices and the restriction of democratic freedoms, has been accused of exploiting the current crisis for political gain.
“Hosni Mubarak's thugs have beaten and killed more Egyptians than any hooligans,” said Hossam el-Hamalawy, a local journalist and blogger. “I'm glad everyone suddenly remembered Egyptians have ‘dignity’ that should be fought for and protected from humiliation.”
Posted by Jack Shenker at Sunday, November 22, 2009

Hey Jack ,
Good article , just would be closer to reality if you did mention that the Algerian team bus was stoned with three players injured , one day before the match in Cairo, this facts can be verified on the Fifa website.
Cheers

KCZ is clearly a world-class pedant. I thought this article was perfect